Running of the Elves 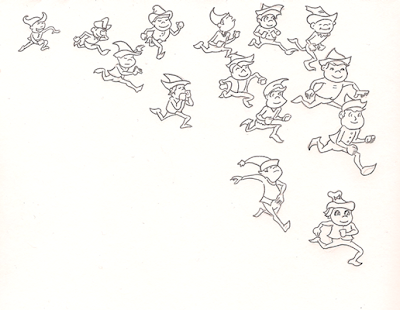 Had a blast drawing today. I woke up with a really bad hand cramp, and drew through it. It was still bugging me all through work today, hopefully it doesn't persist. It's seemed to have subsided for the moment though. Woo Hoo! If anyone knows of any good exercises or best practices to avoid getting hand cramps please let me know!

Worked on some more Preston Blair Elves. They were a bit difficult. If only because of how small I had to render them, while still trying to give them personalities, and keep the perspectives, positions and anatomy correct. Well, as correct as elf anatomy can be. The image really didn't even come together until I re-penciled it darker. Now I like it.

My friend Pelch is starting a new blog. It sounds like it's gonna be great. Anyways, he asked me yesterday, if I could draw a T Rex reading. Here's what I came up with. He seemed to like it too! 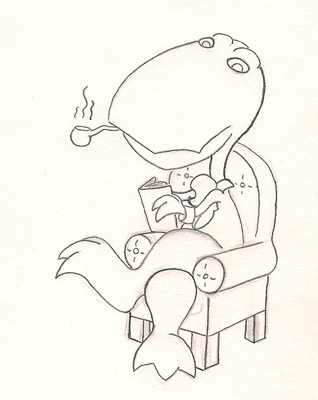 When his blog is up and ready I'll be sure to let everyone know.

Yesterday, I mentioned "Avoiding the Tangent." I read about this in Walt Stanchfield's book Drawn to Life Vol 1. I found it really helpful, it has popped up in my mind in almost every drawing I've done since. He explains it eloquently, but I hope I can give you at least an idea of what it means. First of all what is a tangent. Basically for us it means, a line that you make somewhere on the page that flows into another line. 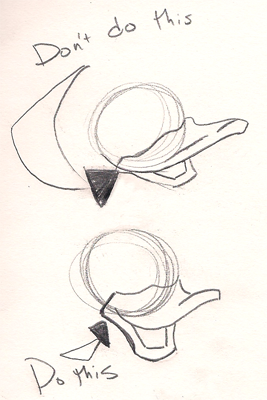 In the first picture it looks like the head is flowing into the beak. The line doesn't seem to really break even though there is a corner of a beak drawn. Now the second image takes that same idea but instead of the line of the head and the line of the beak being on the same curve or tangent it's been moved down and over. Thus you get a more accurate representation of the image you want to display. It adds more weight, depth, perspective and definition. 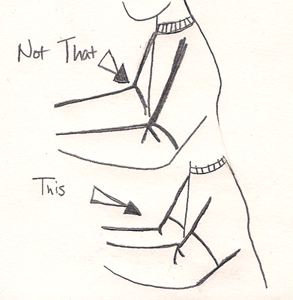 Here's another example. Just by adding a few clothing wrinkles that break the line flow the image seems to pop quite a bit more.

On a final note, S. Manor, who commented on the site a few days ago, started a new sketchblog. You can check it out at http://smanorsketchblog.blogspot.com/. Her sketches look great! Hope to see a bunch more great drawings from her! Best of Luck!

Oh, and here's a few more Gilligan the Giraffe sketches from earlier today!

Posted by turbos at 1:22 AM No comments: Links to this post