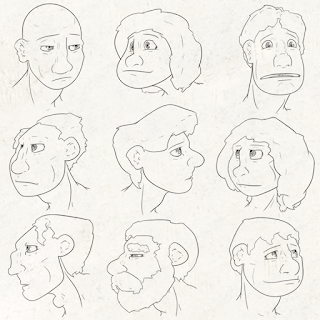 Posted by caseyturbos at 7:52 PM No comments: Links to this post

Today's Walk is a Deep Squat Walk.
Head - leaned forward, light side to side sway
Chest - leaned over and puffed out, light stretch and tilt side to side
Hips - down low, rotate to offset the chest and favor the next step
Legs - low-medium bent steps
Feet - extra ball roll, drag back on the passing position, land with a little toe flop
Arms - lifted up, light side to side sway and raise
Hands - stretched upward, light sway and overlap from the movement of the arms and forearms extending into the fingers and thumbs

Posted by caseyturbos at 1:21 AM No comments: Links to this post

Animating a Walk from Start to Finish - Appeal

APPEAL
A live performer has charisma. An animated character has appeal. Appealing animation does not mean just being cute and cuddly. All characters have to have appeal whether they are heroic, villainous, comic or cute. Appeal, as you will use it, includes an easy to read design, clear drawing, and personality development that will capture and involve the audience's interest. Early cartoons were basically a series of gags strung together on a main theme. Over the years, the artists have learned that to produce a feature there was a need for story continuity, character development and a higher quality of artwork throughout the entire production. Like all forms of story telling, the feature has to appeal to the mind as well as to the eye.