Good, then Fast, then Good and Fast

Another late night tonight! Albeit, I fell asleep on the couch after work, but hey. Got up early to do a bit of perspective work. Still find some of the angles quite challenging, but I'm enjoying the learning process. I like adding more detail through perspective (ie small characters in the background, characters off to the side and bent in strange positions) it's something I really haven't implemented into my drawing repertoire. I look forward to using this tool more and more. 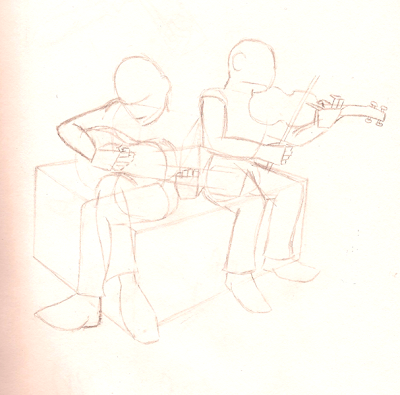 Messed around on chatroulette again tonight, it's just such a great way to practice for me and I have fun doing it too. Not as many people were receptive tonight, but I still managed to get a few pretty decent sketches out of it. 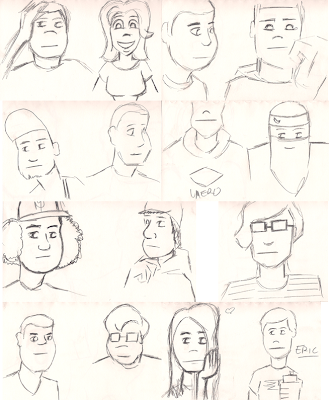 A couple of great points of inspiration from the various readings and listening I did today. I forget if it was Kevin Cross, Joshua Kemble, or Chris Oatley who said it, but this phrase really stuck with me. Forgive me if it's a little off, but it was something to the effect of "First you get good, then you get fast, then you get good and fast." Definitely something for me to strive for, and keep in mind while I'm trying to master my drawing. (as heard on Chris Oatley's Artcast). The other quote that really stuck out to me today was again from Walt Stanchfield's Drawn to Life Vol 1 "What a horrible fate - to be just a drawing." He was talking about having meaning and feeling behind each and every gesture and drawing you make. I really wanna get to that point some day!
One last thing! I got my first comment on the blog yesterday! Well to be completely honest I got a comment yesterday (thanks anonymous) to try out chathopper in lieu of chatroulette. Which I did. I like the interface a lot better than chatroulette, but it doesn't seem to have as many people on, at least tonight. So I ended up going back. Anyways after I saw I had a comment yesterday I went back through some old posts and saw that I had a comment on an older post! Just wanted to give a shout out to my first commenter S Manor and her blog monoclecomics. Awesome stuff over there, you should really check it out. Thanks for the feedback! I'll have to do another expressions study sometime soon.
Posted by turbos at 2:57 AM No comments: Links to this post