A funny drawing gets funnier when it's animated!

I finished another sketchbook last night! Which means I'm averaging around 100+ pages every 2 weeks. I've heard professionals say 1 good drawing in 10 is a pretty good ratio. I think I'm at least there.

I got a chance to read some more of Walt Stanchfield's Drawn to Life Vol 1, and it got me thinking. I'm sure some one else has felt this before, but you know that feeling you get when you have an idea in your mind and when you go to put it down on paper it doesn't come out quite like you really want it. Well, Mr. Stanchfield was talking about the Six Rules of Perspective, and how he uses them either consciously or subconsciously on every drawing he does and the line from chapter that caught my mind was "Knowing and using these principles when needed is like having a good road map when traveling in unfamiliar places." The rules aren't gonna get you there, but they will definitely guide if know where you're at and where you want to go.

Claude and his turtle having some good old fashion fun. 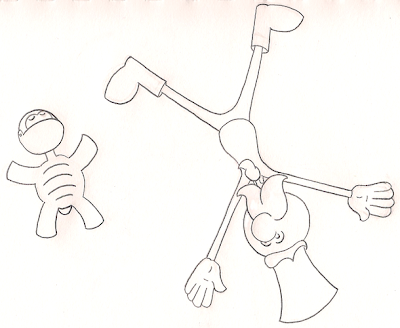 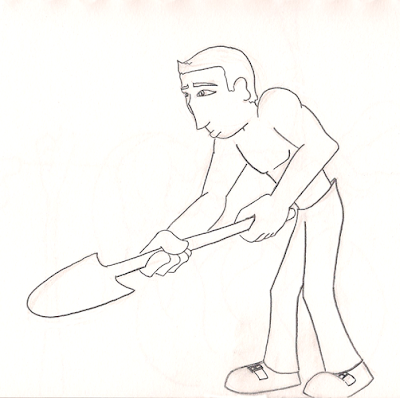 The enraged monster must not have been aware of his own strength and rage, either that or he wasn't quite using all 2 ounces of his brain power and snapped the skewer in half. Our little hero used the drastic change of circumstances to his benefit. 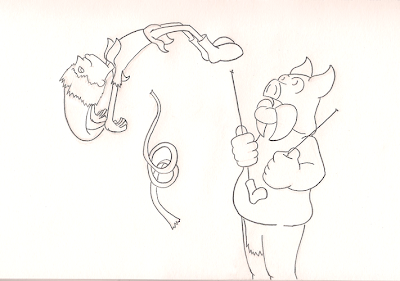 As I've mentioned in the past I love everything Disney Animation related. So last night after finishing my daily drawing and blog post I hopped over and browsed Cartoon Brew, and came across the Ward Kimball tag. Of course that meant that the next few hours I'd be reading, watching, and drawing all things Kimball. I have to admit at first I wasn't a big fan of Kimball's being a Milt Kahlite his drawings always seemed inferior, but after a decent amount of actual exposure to his work he really can capture an idea. I love his sense of humor and his attitude towards life. It really comes across in his drawings. They are really expressive and every one feels like it's moving on its own. After watching a few great video interviews, really examining some of his images and reading a bunch of articles about him I found this great quote of his. "A cartoon character who is funny to look at before he is animated is going to be made funnier by the movement." Thanks for the inspiration!
Posted by turbos at 9:57 PM No comments: Links to this post