Animating A Walk from Start to Finish!


12 Principles of Animation -
FOLLOW THROUGH AND OVERLAPPING ACTION
When the main body of the character stops all other parts continue to catch up to the main mass of the character, such as arms, long hair, clothing, coat tails or a dress, floppy ears or a long tail (these follow the path of action). Nothing stops all at once. This is follow through. Overlapping action is when the character changes direction while his clothes or hair continues forward. The character is going in a new direction, to be followed, a number of frames later, by his clothes in the new direction. "DRAG," in animation, for example, would be when Goofy starts to run, but his head, ears, upper body, and clothes do not keep up with his legs. In features, this type of action is done more subtly. Example: When Snow White starts to dance, her dress does not begin to move with her immediately but catches up a few frames later. Long hair and animal tail will also be handled in the same manner. Timing becomes critical to the effectiveness of drag and the overlapping action.

Today's Walk is a Squash Crawl Walk.
Head - bent backward, light bounce and tip outward on the chin
Chest - bent over, extra squash and stretch, with a little twist and compress side to side
Hips - rotate to offset the chest, extra bounce and overlap
Legs - low small steps
Feet - drag back on the passing position land with a medium toe flop
Arms - lead the action, low medium forward movements
Hands - pressed against the ground, drag down on the passing position land with a little overlap on the fingers and thumb

Posted by caseyturbos at 9:23 PM No comments: Links to this post 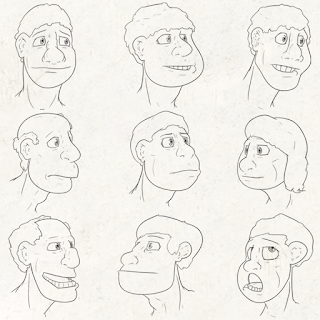 Posted by caseyturbos at 1:49 PM No comments: Links to this post 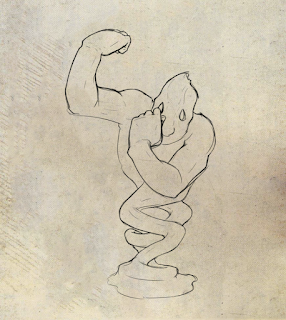 Posted by caseyturbos at 1:46 AM No comments: Links to this post

Animating a Walk from Start to Finish

#1 SQUASH AND STRETCH
This action gives the illusion of weight and volume to a character as it moves. Also squash and stretch is useful in animating dialogue and doing facial expressions. How extreme the use of squash and stretch is, depends on what is required in animating the scene. Usually it's broader in a short style of picture and subtler in a feature. It is used in all forms of character animation from a bouncing ball to the body weight of a person walking. This is the most important element you will be required to master and will be used often.