Animating a Walk from Start to Finish - Timing

TIMING
Expertise in timing comes best with experience and personal experimentation, using the trial and error method in refining technique. The basics are: more drawings between poses slow and smooth the action. Fewer drawings make the action faster and crisper. A variety of slow and fast timing within a scene adds texture and interest to the movement. Most animation is done on twos (one drawing photographed on two frames of film) or on ones (one drawing photographed on each frame of film). Twos are used most of the time, and ones are used during camera moves such as trucks, pans and occasionally for subtle and quick dialogue animation. Also, there is timing in the acting of a character to establish mood, emotion, and reaction to another character or to a situation. Studying movement of actors and performers on stage and in films is useful when animating human or animal characters. This frame by frame examination of film footage will aid you in understanding timing for animation. This is a great way to learn from the others.

Today's Walk is a Totter Walk.
Head - light side to side sway and tilt
Chest - sways and twists side to side with a bit of compress
Hips - rotate to offset the chest, dip down on the passing position
Legs - low dip down and swing outward steps
Feet - rotated inward, drag back and down on the passing position, land with a little overlap on the toe
Arms - held out, light swing and sway side to side and up and down
Hands - help maintain balance, overlap and drag from the sway of the arms and forearms extending into the fingers and thumbs


Posted by caseyturbos at 8:26 PM No comments: Links to this post 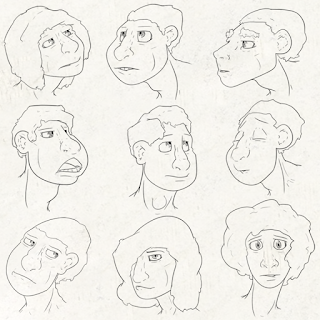 Posted by caseyturbos at 5:02 PM No comments: Links to this post