All The Young Heroines

How do I start off today? I think that's where. That's the way today has been going. It seems like I'm always avoiding doing straight head on faces. I tend to over analyze them. The eyes have to be exact, the lips have to be perfect, the nose has to be here, the ears there, etc. While yes, you do have to have the right parts in the right places, If you actually study a persons face it's never exact. At least I'm aiming for perfection. Preston Blair's young heroine (as in the girl, not the drug *how could a drug be "young" anyways*) seems pretty straight forward, but not for me. Well not tonight it seems. Powered through it, and it actually turned out alright. After scanning it in and analyzing it, I found even more areas that I wasn't 100% satisfied with. On a more positive note it helped me recognize a couple more areas I need to focus on. 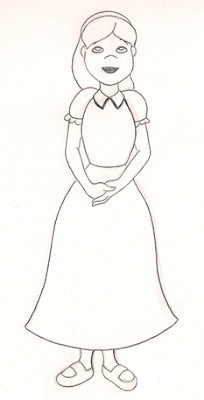 First day of my new character a day challenge. I was listening to Kim Holm talk about Norse mythology on Art and Story Extreme, and I've always been a fan of mythology, mainly of the Greek flair. At the same time I was thinking of the art style of Mucha Lucha. Which is odd because I've never actually seen the show. So I came up with the idea of Mythological Luchadores. After thinking about it throughout the work day and talking to Rhys about the idea. I kinda morphed the concept into what I've coined now as "Minithology". So here's a couple character ideas (Zeus, Hera, and Hercules). 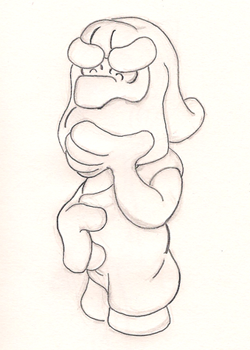 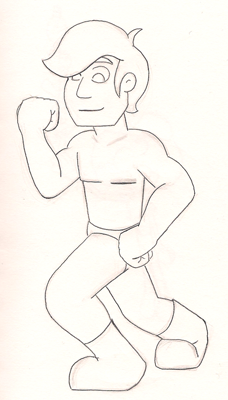 Gilligan's trip to the Zoo.

Claude and his turtle try to change a light bulb. 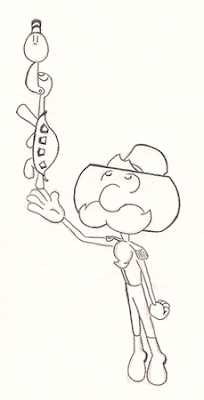 As you might have guessed from some of my other posts I partake of the occasional computer/console game. I've come to the realization lately that I don't necessarily even enjoy playing them. I simply like to immerse myself into the imaginative worlds other people have created. When I was little I didn't have a video game system so I used to go over to my friend's houses and watch them play. I loved it even more than I liked to play them myself. Rhys and I bought a new Xbox360 today! Our old one Red Ringed. So I got to play a few minutes of Fable 2 today. I think that franchise might be in my top 5. The art style is such a great mixture of actual medieval / post medieval concepts and outrageous over the top creativity. If you've never checked out the art you really should do yourself a favor and spend a few minutes looking at Lionhead Studios concept art page or Mike McCarthy's cghub portfolio.